About the South Campus Quarter 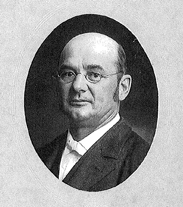 Paul W. Baer Trust Properties, LLC is a Family owned business. The Baer family has been living in Oxford for over a hundred years, and have close ties to Miami, with many of them attending the University. They have been managing rental properties since 1918, and five generations have worked to make the family business a success.

In 1902, Oxford, Ohio was a small thriving college town, home to a number of higher educational institutions: Miami University, Oxford College, and Western College for Women. Michael Rine Baer, a Presbyterian Minister living in Illinois, had a daughter attending Western College. His wife, Henrietta, was looking to find a suitable place to retire, and her concern for the education of their two youngest sons led her to take note of a small farm for sale in Oxford. 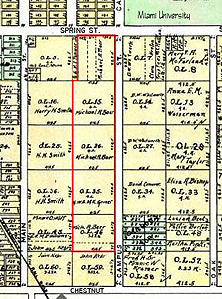 Henrietta counseled Michael to look at this property while visiting their daughter at Western. Michael liked what he saw and purchased the Mason Farm. The farm ran south from Spring Street towards Chestnut Street, and west from Campus Avenue towards Main Street.

This land, originally purchased in 1902, is the area now known as South Campus Quarter. At the time of the purchase, Miami University stopped at Spring Street; today it goes all the way down to Chestnut Street, running the length of The Quarter.

Michael continued to preach after moving to Oxford. His two younger sons, Paul and Carlos, grew up in Oxford and attended Miami University. Carlos became a famous football player and you can see a plaque dedicated to his memory on one of Miami’s football stadium gates. When World War I began, Carlos was one of a small group of men from Miami who joined the war effort even before the United States got involved, working as an ambulance driver for the French. When the United States entered the war, Carlos enlisted and was deployed to Europe. While waiting to ship out after being on leave, Carlos had an emergency appendicitis operation and died from complications of the anesthesia. 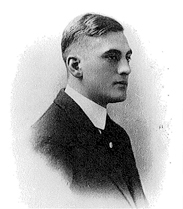 Paul W. Baer graduated from Miami in 1913. He studied pre-med and wished to become a doctor, but abandoned the pursuit of medicine because of financial considerations. On the advice of Miami’s President Hughes, Paul pursued additional education at Iowa State and then transferred to The University of Illinois, where he received training in the pasteurization of milk. Paul returned to Oxford and opened the White Cross Dairy in 1915. He was the first person to sell pasteurized milk in the Oxford area, and Miami University was one of his first clients.

In 1918, Michael Rine Baer constructed the first rental building on the property, consisting of four apartments. This building still stands today; it faces onto Spring Street and is now the home of Delta Tau Delta House.

Paul’s dairy pasteurization business flourished. In the 1920s he expanded, and Polar Baer Ice Cream was created. He would pick up milk from local farmers in the mornings and bring it back to his dairy for processing. The Dairy buildings were located on what is now 308 S. Campus Avenue. In the late 1920s, Paul built a garage to house the trucks he used for his dairy business; this structure would eventually be converted into the building that is currently located at 308 S. Campus Avenue. 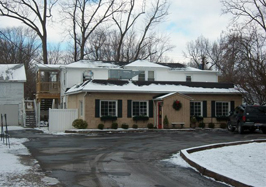 In 1935 the original dairy building burned and Paul converted the garage into a dairy. He continued pasteurizing milk, but ceased making ice cream. Paul continued in the dairy business until 1944. In the late 1940s he added four one bedroom apartments to the second story of the dairy building, creating 308 S. Campus Avenue Apartments. In the 1950s Paul converted the ground floor to an eatery, which he leased out. The lower level is still being used as a restaurant, and is currently Paesano’s Pasta House.

For the most part, the land Paul Baer inherited is still intact, though some small pieces were sold during his lifetime. Today the Delta Sigma Pi Fraternity National Headquarters, the Lutheran Church, and a small apartment building facing onto Campus Avenue, are the only buildings in The Quarter that are not owned by the Baers.

Paul Baer had been involved with the property rental business for the majority of his life, starting with the apartments his father built on Spring Street. In addition he had built his own apartments at 308 S. Campus Ave, and taken in numerous student boarders over the years. It was after his retirement, however, that he became deeply involved with student rentals, greatly expanding the family business.

The White House at 111 Bern Street, originally located on Maple Avenue and former home of Weeb Eubanks, the famous Miami football coach, was scheduled to be torn down in the early 1950s to make room for what is currently Scott Hall. Paul purchased the house and moved it to its present location on Bern Street, converting it to a rental property.

In the late 1950s Paul built Bern Street Apartments. These apartments are on the corner of Campus Avenue and Bern Street. They were designed by Victor Furth, a Miami University Professor of Architecture, who was originally from Czechoslovakia. The buildings are architecturally pleasing, with hardwood floors and large bedrooms.

Finally, at the age of 77, Paul built Campus Courts Apartments. These apartments are on South Campus Avenue. These one and two bedroom apartments are conveniently located across the street from Miami’s Recreational Center.

Paul W. Baer Trust was established in 1979 and Paul’s descendents continue to have an active role in the family business. The family’s commitment to quality student housing continues with our newest community, Campus Commons.

Phase 1 of the Campus Commons development was designed by architect Andrew Schaub, of ArchitectsPlus, who won a 2011 CORA (Congress of Residential Architects) award for his design. These units feature unique and spacious floor plans with bamboo flooring, large energy efficent windows, and other desirable features.

Built using priniciples of sustainable living and Green Design, Campus Commons Phase 1 buildings received LEED (Leadership in Energy and Environmental Design) Silver certification in September of 2012. These are the only private residential buildings in Oxford with LEED certification.